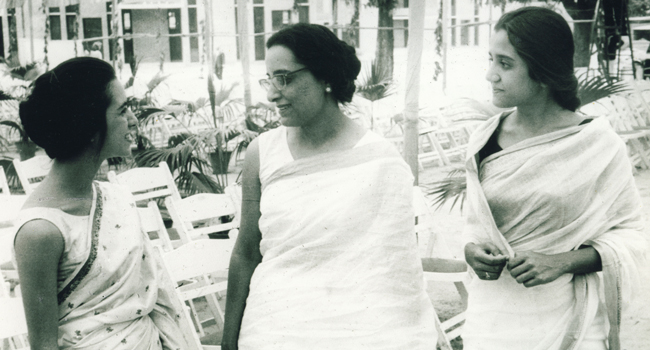 Dilnavaz Sidhwa (on the left) and Harsha Rawal (on the right), 1st batch PGP students (1964-66), with Dr. Kamla Chowdhry, IIMA faculty member, during the first convocation ceremony on 10th April, 1966.

Executive education was launched by IIMA in January 1964. IIMA pioneered a unique Three-Tiered Programme for Management Development (dubbed later as the 3TP) with three different levels of the firm’s managerial cadre (middle, senior and top) attending the programme in different batches and for different durations. The first locations for 3TP included Jaipur and Agra, and programmes were mostly held outside IIMA until the Management Development Centre started functioning at IIMA in 1979. Other Management Development Programmes (MDPs) were offered on a wide variety of topics covering agriculture, small and medium enterprises, industrial relations, computer applications, women managers and much more.

Participants of IIMA’s executive education programmes comprise the who’s who of management cadres in India. For instance, 26-year old A M Naik participated in IIMA’s Laboratory for Personal & Organizational Development in 1968 when he was Works Manager at Larsen & Toubro and he later rose to head Larsen & Toubro and also become Chairperson of IIMA’s Board of Governors between 2012 and 2016. Azim Premji of WIPRO fame participated in IIMA’s 3TP for Management Development in 1973.

More information on current programmes can be found on this link.

The first academic year of IIMA’s flagship two-year Postgraduate Programme (PGP) in Business Administration began on 1st July 1964 and the first batch of 48 graduating students convocated on 10th March 1966. Since then batch sizes have risen gradually with 135 graduating students in 1980, 159 in 1990 and 168 in 2000. Following a doubling of intake to accommodate policy-mandated higher reservation of seats for affirmative action, the number of graduating students rose to 401 in 2017.

Initially, the admissions process was based on shortlisting of students based on application forms, followed by SCAT (School and College Ability Test developed by ETS Princeton), group discussions and interviews. The Common Admissions Test (CAT) was first administered for the class of 1977-79 by the IIMs in Ahmedabad, Calcutta and Bangalore and soon became the principal gateway to be shortlisted at the IIMs, with final selections taking place after an additional round of group discussions and personal interviews.

The broad structure of the programme has generally involved a rigorous first year of core courses in functional areas of management with the second year offering electives that allows students to specialize in specific management domains and also providing exposure to off-beat topics that enable creative and critical thinking. A Placement Office run by the students interacts with the business world during their course of study, first for internships during the summer between the first and second year, and for jobs after graduation. General Management has been an important sector for placement, with successive phases of marketing, finance and consulting sectors respectively dominating graduates’ choices.

Since IIMA was registered as a Society and outside the purview of the University Grants Commission, it could only offer Diplomas for a long time. The Diplomas were, however, well recognized in the business world and other educational institutes. The title of the programme was changed from ‘Business Administration’ to ‘Management’ for the graduating batch of 1975 to reflect a more holistic outlook and purpose of the education imparted at IIMA. Following the passage of the IIM Bill in 2017, the IIMs could finally offer degrees and IIMA conferred the MBA title on its class of 2019.

The roots of the FDP lie in the Programme for University Teachers held in Bangalore between March 21-April 16, 1965, for 36 faculty members from various educational institutes, co-sponsored by IIMA and the US Agency for International Development. The first faculty members at IIMA had themselves undergone the International Teachers Programme at Harvard Business School in the early 1960s and the programme was envisaged on similar lines, though for a much smaller duration.

After a series of experiments of the University Teachers’ Programme (UTP), the one-year residential FDP was launched in 1979, then called Programme for Development of Management Faculty. Between 1979 and 2001, the FDP was a one year programme with a focus on courses and research projects. Since 2001, the programme duration was shortened to four months of course work with a focus on general management. From 2018, the four-month programme was offered in two modules, Pedagogy & Research and General Management. Over 800 faculty members have participated in the FDP till date.

The Agriculture & Co-Operatives Group of the 1960s was an important part of IIMA’s effort to study the agricultural sector at a critical juncture of India’s development trajectory. It transformed into the Centre for Management in Agriculture (CMA) and began its teaching programme in 1970 with a one-year Programme for Management in Agriculture (PMA). In 1974, it changed this programme to a two-year PGP in Management-Specialization Package in Agriculture (SPA), where students took the same courses as other PGP students in the first year and took specialization electives in the second year. Since the batch of 2000-02, the degree’s title was changed to PGP in Agri-Business Management (ABM) and since the batch of 2015-17, it was changed to PGP in Food & Agri-Business Management (FABM) reflecting the change in focus of the programme.

In 1971, IIMA became the first IIM to start a doctoral programme that later became known as the Fellow Programme in Management (FPM). For the first few years, it was advertised as the FBA (reflecting business administration rather than management). For several decades, the degree granted was ‘Fellow of the Indian Institute of Management Ahmedabad’. Following the passage of the IIM Bill in 2017, the IIMs could finally offer degrees and IIMA conferred the PhD Programme in Management title during the 2019 convocation.

The doctoral programme typically required two years of course work followed by few years of research work under a thesis advisory committee. The first year of coursework was common with the PGP students for many years before the programme switched to a system where distinct core courses were offered in the first year itself.

Abhinandan Kumar Jain was the first doctoral student who graduated from IIMA in April 1974. He was previously a PGP student at IIMA and a Research Associate in Marketing and after his doctoral studies, he joined IIMA faculty in the Marketing Area in 1974 where he worked until his retirement in 2010, and thereafter as adjunct faculty. In 2019, he was felicitated by former students in Mumbai celebrating 50 years of his association with IIMA, as described on this link.

More information on the current doctoral programme can be found on this link.

2006| PGP in Management for Executives (PGPX)

The PGP in Management for Executives is a one-year full-time residential programme for executives. More information about the programme can be found on this link.

The e-PGP in Management is a 2-year postgraduate diploma programme offered on interactive technology platform. More information about the programme can be found on this link.

Since October 2006, IIMA has offered a short-term full-time residential course in business management for officers of the Indian armed forces. More information about the programme can be found on this link.

Between 2006 and 2010, IIMA offered a one year residential postgraduate programme in public management and policy, primarily for government officers and public enterprise managers.

2019-20 @ All Rights Reserved.
Website developed and maintained by IIMA Archives